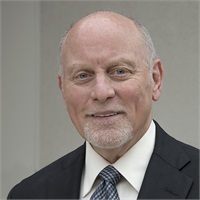 Patrick Lynch III has been a financial planner in San Antonio since 1981. He is a nationally recognized leader and innovator in the financial services industry, and received the “Financial Planner of the Year” award in 2004. As an educator in the financial planning industry, Pat has conducted seminars for the general public, private corporations, and professional organizations such as the Texas Society of CPAs.

Pat’s practice is geared towards the transition from wealth accumulation to wealth distribution which is a major focus among retirees. His 30 plus years of experience, knowledge, and understanding of the financial planning industry have been invaluable to retirees as they transition to the next phase of their life.

Pat received his Bachelor’s degree from Thomas More College and his Master’s degree from Trinity University. He is a member of the Financial Planning Association and has been an active volunteer for the Big Brothers and Big Sisters of San Antonio since 2001. He enjoys playing competitive racquetball and cycling in his spare time, and is the proud father of two children – Lauren and P.J, who both graduated from The University of Texas at San Antonio.

Let’s Talk About You. Schedule Your Free Consultation Today.

Call Now
Back to the top